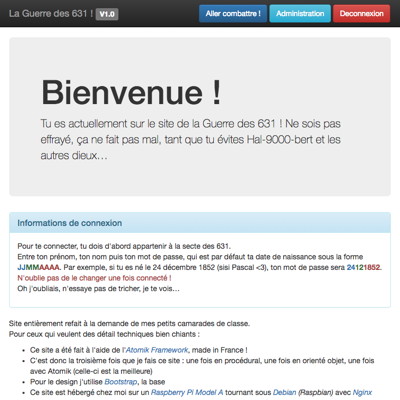 When I finished learning PHP (mostly on OpenClassroom), at the time I entered high school, I tried my newly acquired skills with this small project.

Every day, each student of my class could connect to give three hits to other students of the class.

The first version in procedural programming had no stylesheet. This made the interface pretty austere.
Almost the students of my class liked the concept and played the game.

The next version, same year and same class, got a responsive design with nice health points bars thanks to the [Bootstrap]() CSS framework. I also entirely remade the website, this time object oriented. It’s my first project in OOP and with Bootstrap.

The third and last version of the website, for my high school final year’s class, has once more been entirely remade. This time, I got interested in PHP frameworks, and in this case in AtomikFramework. It’s a small French framework, very light and easy to use, but sadly not maintained anymore.
New features have been added: every day, it is possible to heal a student. Gods also appeared: each day, one God hits a random student and another one heals a random student.
On top of that, a new administration interface was available, altogether with a visually pleasing log of all the website’s activity. This allowed me to quickly locate cheat attempts (the default passwords were the student’s birth date, so it was possible to login on someone else’s account).

This project also allowed me to get started with system administration on GNU/Linux. The website was actually hosted at home on a Raspberry Pi Model A (at the time were Raspberry Pis just appeared) with the Raspbian distribution (Debian for Raspberry Pi). My taste for optimization and performance brought me to use Nginx as a web server and SQLite for the database.

And thus my love for the command line was born! ❤